Walls found at Cook home to be left exposed

Walls found at Cook home to be left exposed 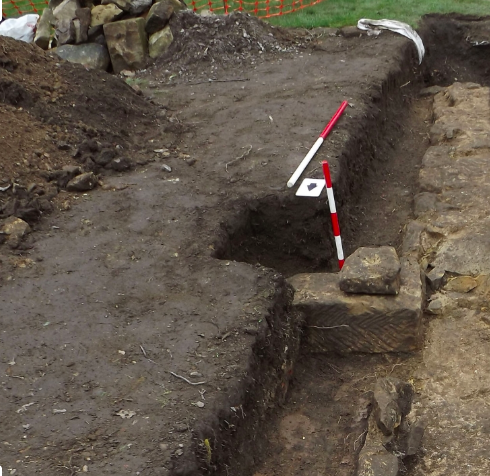 Future visitors to the refurbished Captain Cook Memorial Garden in Great Ayton are to get an unexpected view of part of the family’s former home.

The garden will reopen to the public next month (May 18) following a re-vamp, which discovered some of the original walls of the Cook cottage.

Contractors working on creating an outline of the cottage - located in the garden until it was moved stone by stone to Australia in 1934 – unearthed some of the building’s original foundations. They have now been exposed following an archaeological dig – and will remain on public show for the next five months.

The dig was also filmed for the archives – and for a display at the Captain Cook Schoolroom Museum in the village.

“We are really excited to have discovered a section of the original foundations and rather than just record our findings and then cover them up, we have decided to leave them exposed over the summer months for visitors to see,” said Great Ayton Parish Council Chair, Angela Taylor.

Over the past few years the garden had fallen into decline – and with no signage or information boards was often overlooked by visitors. Work has included clearing the site, restoring the garden, installing a new footpath, repairing the obelisk, recreating the cottage layout and installing interpretation boards. There will also be a new website and leaflets.

The rejuvenated garden will be officially opened on May 16 to celebrate the date in 1772 when the cottage was sold by Captain Cook’s father, bringing the family’s 35 year association with the village to an end. The formal opening will be followed by a day for local schools before the garden is publically open on May 18.

The Parish Council scheme has been made possible thanks to a grant of almost £16,000 from LEADER funds – the rural development programme for the UK, and support from Hambleton District Council.